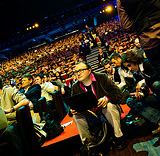 This post is a reply to Annabel Crabb’s ‘An audience, an audience, my Kingdom for an audience’ published on The Drum.
Annabel’s piece is a thought provoking account of the future of journalism and outlines an inconvenient truth, or as Annabel writes, “a fabulously complicated problem.” Annabel’s piece l

ooks at the history of political reporting and its future and the role government and journalists will play tomorrow.

Let me start by defending journalism. I’m passionate about my craft but I’m also willing to ponder what it would mean if journos were out of the equation. Do journalists still have the authority to define what is news? Media analysts have been saying for twenty years that technology such as the Internet won’t kill traditional mass media; people will just get their news elsewhere via mobile phones or the web. But what few of them are willing to entertain is that people might get their news elsewhere and from someone else!

I dug up an old text book (yes, I kept all my undergrad books). Len Grenato’s 1991 ‘Reporting and Writing News’ says of the craft, “News is a journalist report to an audience about an expected or unexpected situation in which the public has a legitimate interest and which may bring about a change that will impact on society”.

It was a definition that existed before the Internet and before the advent of social and mobile media platforms. Let me just, for the sake of attracting blog comments, change some words around, “News is an expected or unexpected situation in which people have a legitimate interest and feel compelled to share with others. The value of this news will be determined by how many people think it can change or impact society”.

The above really opens a Pandora’s box. If journalists start producing less news, where will advertisers spend their money? Will advertising be associated with news forever? Google and Facebook let their users talk about whatever they want to talk about while letting advertisers watch on. The merits of that are for a whole other post.

Annabel talks about the advertising dilemma for media. Mass media in the day of Len Grenato must now deal with fragmented audiences. In theory, digital platforms make it harder to fund journalism. Annabel offers some hope: “Pitching an ad at a thousand people whom you know are likely to be in the market for a stroller might be more valuable, to Mr Bugaboo, than an ad in a paper read by 200,000. You still pay. You just pay in different ways.” But again, why doesn’t Mr Bugaboo just spend the same amount of money on an online club for mums in his area, and offer a discount on strollers? He can have a Facebook page (or advertise to mums in his city on Facebook), blog, and a podcast about baby products on syndication to his 1000 mums. He can offer them better customer service because he has much richer data on who they are, where they live and what their budget look like. He might invest in a ‘content manager’ rather than an advertising agent. No?

It’s dangerous to predict trends in media when you’re dealing with the human condition. There are some inherent values in people that rise above theory. Take the movies for example; they died out when TV arrived, came back when people got bored of being told what to watch, died out when video came along, but came back when people realised they enjoyed theatre in the company of others. People like to have stuff done for them. People like to have material collated for them and this inherent trait will be a savior for good journalism. Or will it?

Annabel writes, “Political journalists no longer have a comprehensive monopoly over the gathering of political information; anyone can watch press conferences. Anyone can watch Parliament. Anyone can read press releases. Anyone can read budgets, legislation, Senate reports, inquiry submissions, party platforms. Anyone can listen in online to an interview that a politician gives in Brisbane or Launceston.” Well that’s true to a degree. Those press conferences are being filmed by mass media organisations and much of parliament or at least question time fails to relate to people. The future shouldn’t be about getting everyone to replicate the world of reporters in Canberra. The future should challenge politicians to communicate in the world voters know and understand.

Political reporting would never be obsolete because

who would fill the void? Who would take politicians to task? Couldn’t we leave that up to voters? I know, I know that the concept of trusting politicians to use emerging communication tools in the electorate is naive, and for the foreseeable future it is naive. Consider this though, journalists here and around the world are racing to have a social media presence because we now understand it’s such an effective tool for engagement; it’s considered more trusting. Well why don’t reporters demand the same of politicians? Rather than reporters ‘keeping the bastards honest’, politicians should be expected to act more transparently by using open government sources, social media platforms, video and audio.

I agree with Annabel when she writes, “They still crave control of the message, some sense that they are prevailing against the beast. And I say to them, on this front: Abandon ship!” They can’t control the message, but they should be made to have the conversation. I can hear the criticism of my theory now (and I understand the criticism too). People say without journalists, politicians can’t be trusted. People don’t trust

politicians now. Who will break news about policy or corruption? Voters’ friends, family, people at the local school, bloggers, public servants, lobby groups, NGO’s, opposition parties and coalitions of those groups. It won’t be long before they hall have the media tools to do it. I agree it’s a long shot and far from

reality tomorrow but it’s the kind of scenario people in ‘news’ need to debate.

See more of my photographs and social posts